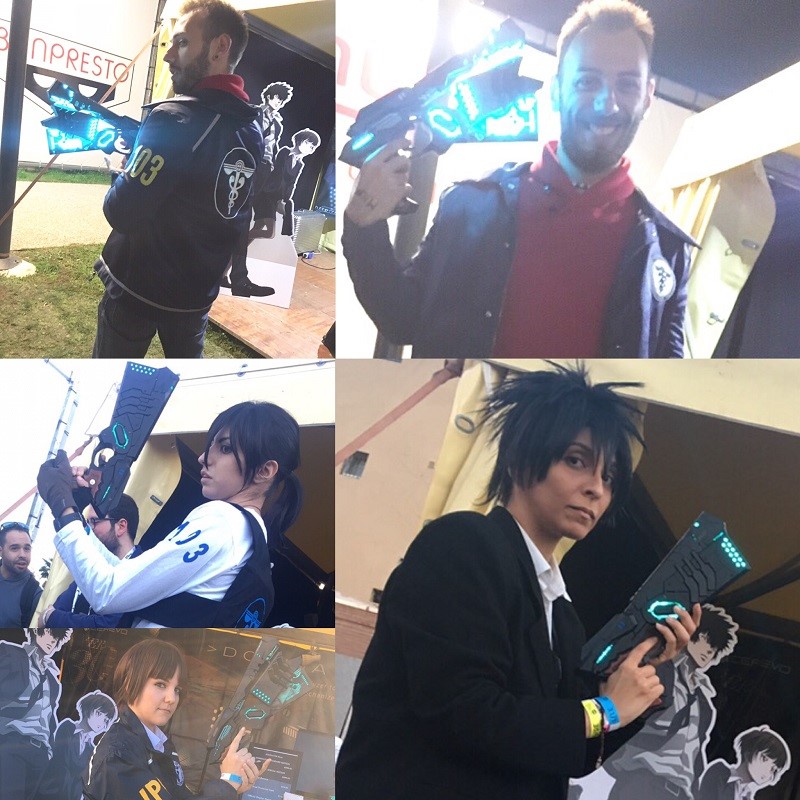 Lucca Comics & Games is the largest European exposition that showcases manga, anime, games, SF and fantasy every year from late October to early November in the town of Lucca,  Tuscany, Italy. Major Japanese manga/anime titles, merchandising items and original drawings were displayed and sold, also cosplayers and artists performed in Japan Town as fans gathered from all over the world at Lucca Comics & Games.

We showcased both the Standard Edition and Special Edition DOMINATOR as well the customized display stand and protector case official accessories at Japan Town. Cerevo intends to expand its brand awareness among PSYCHO-PASS fans overseas and reinforce Cerevo’s enginnering excellence and the fascination that smart toys can bring about by enabling users to become connected while playing.

Guests of all ages experienced DOMINATOR during the expo and they all said FIGATA!! (Cool!) Some guests mentioned they will watch the anime “PSYCHO-PASS“ after trying out DOMINATOR and everyone at Cerevo hopes their fascination will grow over time!  Thank you so much for all the fans of “PSYCHO-PASS“ and those who visited us at Lucca Event!  – Kaori, one of the product team members and from team Cerevo

Cerevo’s impressions: Overall the expo is quite unique; all guests were full of smiles with plenty of cosplayers dressing as they like attending and everyone was keen to experience what was on show. Attendance was diverse with anime fans, tourists and families mixing in an atmosphere that harked back to the middle ages against the backdrop of Lucca’s gothic cathedral and stone streets.

Cerevo has developed and released CEREVO CAM – a digital camera with internet connectivity, the LiveShell series – devices to enable live streaming on Ustream and YouTube using only a digital camera, SmartTrigger – a Bluetooth remote to enable the release of your digital camera shutter from your smartphone, LiveWedge – a 4 input HDMI switcher with live streaming capabilities and the XON series of smart sports products. These products are sold in more than 50 countries. For more information, please visit – http://cerevo.com